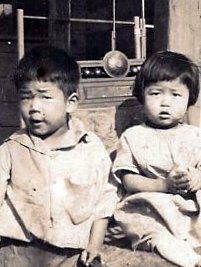 Author’s Note: The following is based on an interview and written from the narrator’s point of view.

It was my brother’s year of Yakudoshi (Calamity).  The year of great loss and misfortune.

A belief in my parents’ prefecture in Japan was that a child of a certain age was especially prone to bad luck.

My mother was warned many, many times, “Do not take your first-born son to Japan in his year of Yakudoshi.”

But my mother did not listen—she was homesick, she wanted to show off her children to her relatives and friends.

Five of us–my mother, my brother, my two sisters, and I—boarded a ship to Japan in 1929.

Four of us–without my brother–returned home to America and then to our father a year later.

My mother was petrified to come back home to my father.

Our home was never the same; the laughter, the family time, and the light in my
father’s eyes were all gone.

My father worked harder and longer after the death of his son.

He carried his gardening tools on his back, took the bus to his clients before dawn.

Every evening, I’d meet him at the bus stop to help him carry his tools home and relieve him of his heavy load.

My father died of a broken heart when I was twelve years old.

He never forgave my mother.

My childhood after twelve was gone. I felt responsible for my mother and my sisters. I knew I had to work hard to help make ends meet.

Every day after school, I rode the bus to work; I washed dishes, cleaned houses, babysat and came home late, ate dinner, and went to bed.

When I turned sixteen, I worked as a live-in school girl in San Francisco.

As I helped cook and cared for the family’s toddler, I wondered how my little sisters were being looked after.

I couldn’t wait for the weekends when I was allowed to go home to my own family.

I found it hard to be the eldest; I was told,  “Set a good example for your sisters,” ten million times by my mother. I told myself, I will never tell my children the same thing.

Then came the war: each of us was told by the government to pack one plate, one fork, one spoon, one cup, one toothbrush, and whatever else we could carry, and report to  a church in Berkeley.

From there, we were taken to Tanforan Race Track in San Bruno, California, to live in horse stalls for the next… no one knew for how long.

The horse stall assigned to us had a loft, so my sisters and I took turns sleeping up there. But no matter how high we went up, that pungent smell of horse manure never left us. At least the loft was a bit cleaner than the actual stalls.

Six months later, we were moved to Topaz prison camp in Utah. It was horrible when the wind picked up; the dust and sand seeped through every crack of the barrack, a thick layer of dust blanketing the table, beds, and floor.

Anything we wanted to do, we had to wait in line. Rain, shine or snow, we had to line up.

The meals were sometimes not too bad, but most of the time the food was inedible.  Who eats tripe?  Certainly not us Japanese. I think that they served us this food just to let us know how they felt about us.

I cursed and questioned my sanity for waiting in the long line to shower, only to have my clean and shiny hair fill up with sand before arriving at the dance party.

There were lots of dance parties on the weekends.

I had a good time in the camp.

Believe me, I did.

I went to every dance and danced until dawn.

I didn’t ask to be sent there, so I decided I was going to have fun, and I did.

As horrible as I found it to be in the middle of the desert with sandstorms, long lines for eating and showers, my mother and I no longer had to suffer — we were no longer separated from her, and she was relieved of the long work hoursshe toiled to support our family.

Now, how do I tell my story, especially for my children to understand?

How can my children know what I went through?

How can they understand and feel my pain?

I don’t think it is possible.

Why would I want to burden them with such a thing?

Newly Wed »
« Where Did It Go?
In the aftermath of World War II, more than 110,000 persons of Japanese ancestry – roughly two-thirds of whom were American citizens – were released from forced imprisonment in U.S. concentration camps. But released to return where, after being taken from their homes along the West Coast? When they were finally allowed to leave the internment camps, they faced a new challenge: How do you resume a life so interrupted.